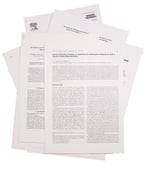 3. The influence of charge and lipophilicity of daunorubicin and idarubicin on their penetration of model biological membranes – Langmuir monolayer and electrochemical studies
Authors: Dorota Matyszewska
Journal: Biochimica et Biophysica Acta (BBA) – Biomembranes
DOI: 10.1016/j.bbamem.2019.183104
Abstract: The interactions of two selected anthracyclines, daunorubicin (DNR) and idarubicin (IDA), with phospholipid monolayers used as simple models of cell membranes, were investigated. The results of Langmuir experiments together with Brewster angle microscopy showed that both drugs strongly affect cancer cell membranes composed of 1,2-dimyristoyl-sn-glycero-3-phospho-l-serine (DMPS). Electrostatic interactions allow positively charged DNR and IDA to interact with negatively charged DMPS polar heads but increased lipophilicity of IDA allows it to penetrate the layer more effectively than DNR and prevents from its expulsion at higher surface pressures. The analysis of the thermodynamical functions of hysteresis proves the presence of the enthalpically favorable interactions within the monolayer during its compression in the presence of idarubicin, which may form aggregates with DMPS molecules. The influence of the drugs was significantly less pronounced for a healthy cell model composed of 1,2-dimyristoyl-sn-glycero-3-phosphocholine (DMPC) due to the lack of strong electrostatic attractions……

4. Orientation control of KNbO3 film grown on glass substrates by Ca2Nb3O10− nanosheets seed layer
Authors: F.Baudouin, V.Demange, S.Ollivier, L.Rault, A.S.Brito, A.S.Maia, F.Gouttefangeas, V.Bouquet, S.Députier, B.Bérini, A.Fouchet and M.Guilloux-Viry
Journal: Thin Solid Filmsr
DOI: 10.1016/j.tsf.2019.137682
Abstract: KNbO3 films have been deposited by pulsed laser deposition on glass substrates covered by Ca2Nb3O10− nanosheets used as seed layer, for the purpose of promoting (001) preferential orientation. Nanosheets have been prepared by the exfoliation process of HCa2Nb3O10 phase that is obtained by cation exchange of the Dion-Jacobson KCa2Nb3O10 phase in an acidic solution. Electron diffraction in transmission electron microscopy performed on KCa2Nb3O10 and HCa2Nb3O10 powders, and on Ca2Nb3O10− nanosheets revealed formation of local superstructures that are not detected by X-ray diffraction due to the weakness of superstructure reflection intensities. Nanosheets were deposited on substrates using the Langmuir-Blodgett method……

5. Incorporation of cyclodiene pesticides and their polar metabolites to model membranes of soil bacteria
Authors: Aneta Wójcik, Paulina Perczyk, Paweł Wydro and Marcin Broniatowski
Journal: Journal of Molecular Liquids
DOI: 10.1016/j.molliq.2019.112019
Abstract: The world-wide application of cyclodiene pesticides (CP) lead to severe pollution of arable land and because of the long half-lives they will be for many decades present in the soil. The only reasonable way of the elimination of these chemicals from the soil is bioremediation – the introduction to the soil of decomposer microorganisms strains capable of CP degradation. CP are highly hydrophobic and exhibit large membrane activity; thus, they can be incorporated to the cellular membrane and retained therein. The presence of CP and their metabolites in the cellular membrane of the decomposer organism can lead to severe alterations of its function and in consequence to the death of the decomposer cell. Microorganisms protect themselves changing the phospholipid composition of their membranes. To shed light on the correlation between the membrane composition and its interactions with CP and their metabolites we applied Langmuir monolayers as versatile models of decomposers’ membranes……

6. Nonlinear interfacial rheology and atomic force microscopy of air-water interfaces stabilized by whey protein beads and their constituents
Authors: Jack Yang, Ilonka Thielen, Claire C.Berton-Carabin, Erikvan der Linden and Leonard M.C.Sagis
Journal: Food Hydrocolloids
DOI: 10.1016/j.foodhyd.2019.105466
Abstract: In recent years, food-grade Pickering particles have gained considerable interest, because of their ability to form stable emulsions and foams. Such Pickering stabilizers are often produced by aggregation of proteins, which typically results in a mixture of cross-linked particles and unbound proteins (smaller constituents). This study focuses on the possible contribution to the interfacial behaviour of these smaller constituents in whey protein isolate (WPI) bead suspensions, which are produced by cold-gelation of WPI aggregates. To understand the interfacial properties of the total mixture, we have studied the involved structures and interactions hierarchically, from native WPI, to aggregates, and finally gel beads.

9. The method of depositing CeO2 nanoparticles onto a DPPC monolayer affects surface tension behaviour
Authors: Maria Miguel Diez, Alison Buckley, Teresa D.Tetley and Rachel Smith
Journal: NanoImpact
DOI: 10.1016/j.impact.2019.100186
Abstract: Studies using Langmuir-Wilhelmy balance (LWB) systems have demonstrated that engineered nanoparticles (NPs) can disrupt the surface tension behaviour of model lung surfactants. However, the majority of such studies used approaches that do not accurately mimic in vivo deposition at the air-liquid interface of inhaled particles – using instead NP suspensions. The present study investigated for the first time the effect of the mode of delivery of NPs to the interface on the compression surface pressure (Π) – mean molecular area (Mma) isotherms of surfactant monolayers, using an LWB. A novel system to deposit a well characterised aerosol of cerium oxide nanoparticles (CeO2NPs) on a dipalmitoylphosphatidylcholine (DPPC) monolayer was developed. The effects of depositing CeO2NPs from an aerosol were compared with two alternative approaches used in the literature: CeO2NPs suspended in chloroform and deposited on a DPPC monolayer and mixtures of CeO2NPs and DPPC in chloroform deposited directly on the subphase. Experiments were undertaken using a physiologically relevant subphase and temperature, 37 °C, with additional experiments at 21 °C. In each case Langmuir-Blodgett films were imaged using scanning electron microscopy and the distribution of cerium mapped using time of flight – secondary ion mass spectrometry……

12. The role of phospholipid composition and ergosterol presence in the adaptation of fungal membranes to harsh environmental conditions–membrane modeling study
Authors: Paulina Perczyk, Aneta Wójcik, Paweł Wydro and Marcin Broniatowski
Journal: Biochimica et Biophysica Acta (BBA) – Biomembranes
DOI: 10.1016/j.bbamem.2019.183136
Abstract: Soil fungi play an important role in the environment decomposing dead organic matter and degrading persistent organic pollutants (POP). The presence of hydrophobic POP in the soil and membrane-lytic substances excreted by competing microorganism to the soil solution is the constant threat to these organisms. To survive in the harsh environment and counteract these hazards the fungal cells have to strictly control the composition of the lipids in their cellular membranes. However, in the case of fungal membranes the correlation between their composition and physical properties is not fully understood. In our studies we applied Langmuir monolayers formed by phospholipids typical to fungal membranes and ergosterol as versatile model membranes. These membranes were characterized by the Langmuir technique, Brewster Angle Microscopy and Grazing Incidence X-ray Diffraction, as well as were exposed to the action of phospholipase A2 treated as a model membrane-lytic protein. We started our studies from the equimolar mixture of phosphatidylethanolamine with phosphatidylcholine and doped this matrix with phosphatidylserine (PS) or phosphatidylinositol (PI)……